The secret is in the details: do you know the difference between ajvar and ajvar with tomato?

Even the experienced connoisseurs of ajvar are often left in doubt when they need to answer the following question – what is the difference between ajvar and ajvar with tomato?

Perhaps we could say that ajvar with tomato is just another of the many varieties of ajvar; however, there is a difference in the recipe, and of course, in taste between these two seemingly similar products. While the main ingredient of the original ajvar is roasted pepper of a specific smoky, sweet taste, ajvar with tomato has somewhat fresher flavor and less dense structure thanks to tomatoes and garlic. But let us start from the beginning…

The genuine homemade original and traditionally cooked ajvar is made with only four ingredients: red roasted peppers, some oil, salt and vinegar. It appears that the number of recipes for ajvar with tomato is equal to the number of households making it. We have chosen the one we inherited from our grandmothers and whose recipe as well as the mastery of cooking it have been passed through generations of women who prepared and preserved these lovely tastes for us with a lot of love. Here you can find recipes for genuine ajvar and our ajvar with tomato. The process of making ajvar with tomato is similar to the one for making ajvar, and the secret is in the best kind of pepper, juicy and fleshy “Kurtovska Kapija”. Tomatoes are blanched and mashed, some peppers are coarsely grated, and remaining are cut, just like with ajvar, and then cooked for a long time at low heat with constant mixing.

The taste of ajvar with tomato in relation to ajvar is somewhat milder, because tomatoes with their fresh, slightly acidic aroma soften the taste of roasted peppers, whereas garlic makes it more aromatic. Also, their textures differ – ajvar is a bit denser than ajvar with tomato, and although both may be bread spread or used as side dishes, ajvar and ajvar with tomato as ingredients when cooking have each their own recommended use.

Ajvar is thus excellent to make any filling or sauce either more aromatic with its wonderful smoky sweetish aromas, or denser or to serve as filling for various pies, cornbread, rolls, meat and other delicacies.

On the other hand, ajvar with tomato, which already reminds of sauce with both its taste and texture, will be fantastic exactly in all those dishes that require full, dense, rich dips, such as zucchini in ajvar with tomato sauce, and in the absence of peeled tomatoes, ajvar with tomato may quite easily and in a very tasty manner replace tomato spread on pizza.

In addition to their irresistible taste, both ajvar and ajvar with tomato are characteristic of having very few calories. Their entirely natural, solely herbal gluten-free composition with no added sugars or artificial additives ideally fits into healthy, light and full fantastically tasty vegan recipes

Tell us about your choice and all the ways you love to eat these two delicacies.
INTERESTING FACT 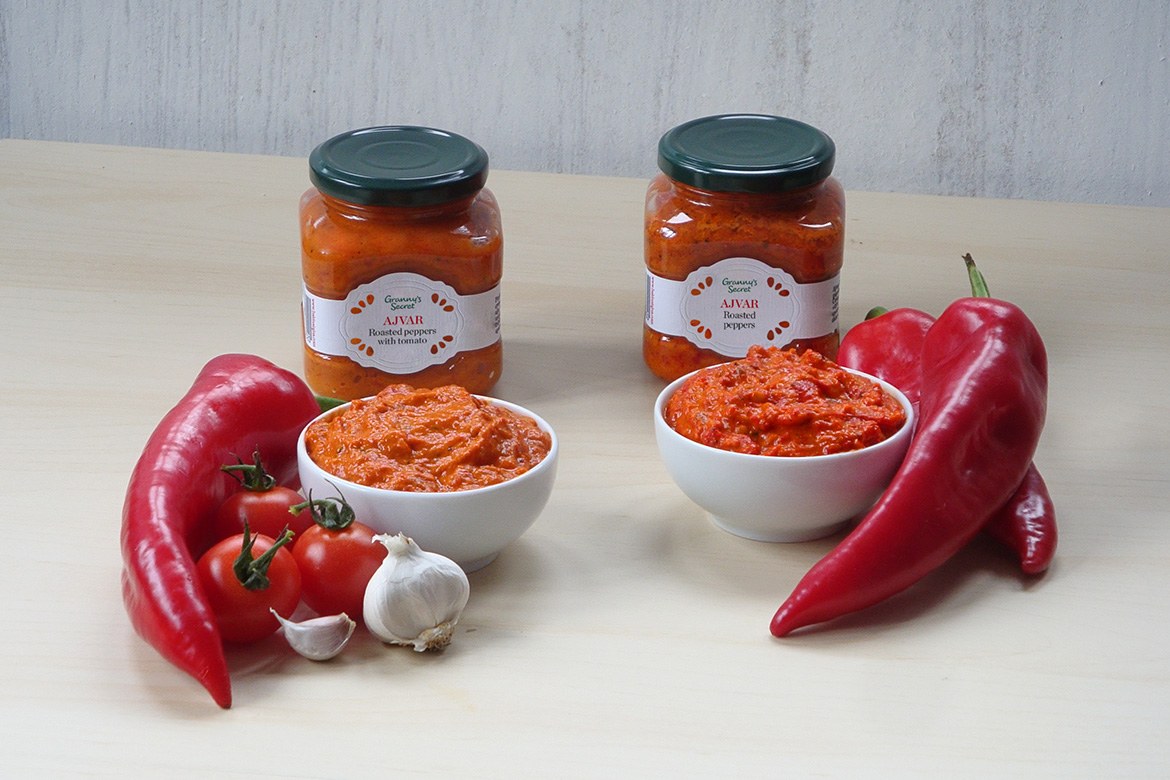 Tomatoes found in ajvar with tomato are one of those foods that are even healthier when thermally treated than raw. Also, tomatoes contain an extremely high level of a powerful antioxidant – lycopene, which gives them, among other things, their red color.