Kebabs, in one way or another seem to be part of all world cuisines that prepare juicy minced grilled meat. Nevertheless, kebabs, ajvar and other local cuisine delicacies, stand out as specialties typical of the cuisines of our region. Nobody knows exactly by whom or when they were first made, however, this information isn’t important.. The glory and universal acceptance of kebabs, ajvar, as well as kaymak and proja, for example, was spread by these foods themselves, via their irresistible tastes.

The secret of the famous tastes of all these dishes is hidden in simple local ingredients prepared in a special way. Because what is well known to any experienced gastronomic traveler who goes on a voyage through tastes and smells of world cuisines, is that the most popular specialties each such cuisine is especially proud of usually come from a mother’s or grandmother’s stove. All those dishes we love and remember today were made with just a few, exclusively fresh, the best of foods these women could find,

Such foods have always been gathering, connecting, warming and embracing people through their taste, but also by smells, colors, the way they’re served. They would often move from mother’s and grandma’s kitchen to the streets where they’d become an inseparable piece of social life, the one in which all those well-known scents and tastes can be easily taken through. It’s therefore no wonder that exactly such dishes have got their place among the top gastronomic specialties worldwide. One can find them on the menu of fancy restaurants, fast food restaurants or family lunches. People talk, write and sing about them. They are affectionately named “comfort food” and “soul food”. No matter how far we wander looking for new exciting tastes, again and again – we come back to them.

By the twentieth century and the invention of the meat grinding machine, the meat for kebabs was finely chopped most often using a cleaver, on a wooden log specially prepared for that occasion. Many connoisseurs will say that even today, if prepared this way, kebabs retain their special, juicy taste compared to those made of minced meat. Gastronomes further say that original kebabs are made of pure beef, a bit more greasy and left to rest for a little, although mixing with mutton is also allowed, as well as being exclusively grilled. But we don’t intend to go into the best recipe for kebabs, because even though they are made from only a few ingredients, there are so many recipes for this specialty that we can’t list them all. What is far more attractive to us when kebabs are concerned is their taste that goes so far beyond the other meat specialties, at least in our humble opinion. “Cevapi” or as they are affectionately called – “cevapcici” are most delicious when traditionally served with pita, finely chopped onions, kaymak and ajvar, while they’ve been recently more and more often found combined with mayonnaise, sour cream or tzatziki. No matter which way you try them – and we do strongly recommend that you start from the traditional version – you’ll see why they’ve got the status of the legendary dish of the Balkan cuisine.

This juicy meat bite is baked in its own juices on the scented charcoal fire; it’s a meal for all occasions. Kebabs are also a light snack between meals tasted easily at a table during a conversation; warm fast food in pita soaked with flavors and scents of the grill; a boldly served specialty of a modern fine dining restaurant; mandatory sizzling snack at summer picnics, home celebrations, parties and receptions. Nothing can spoil them so, being so unbelievably adaptable, they rule all those menus precisely because of their unique, unforgettable taste that has brought them far beyond the borders of the Balkans, and because of which even foreigners are willing to try the tongue twister “cevapcicem ces me, cevapcicem cu te”. 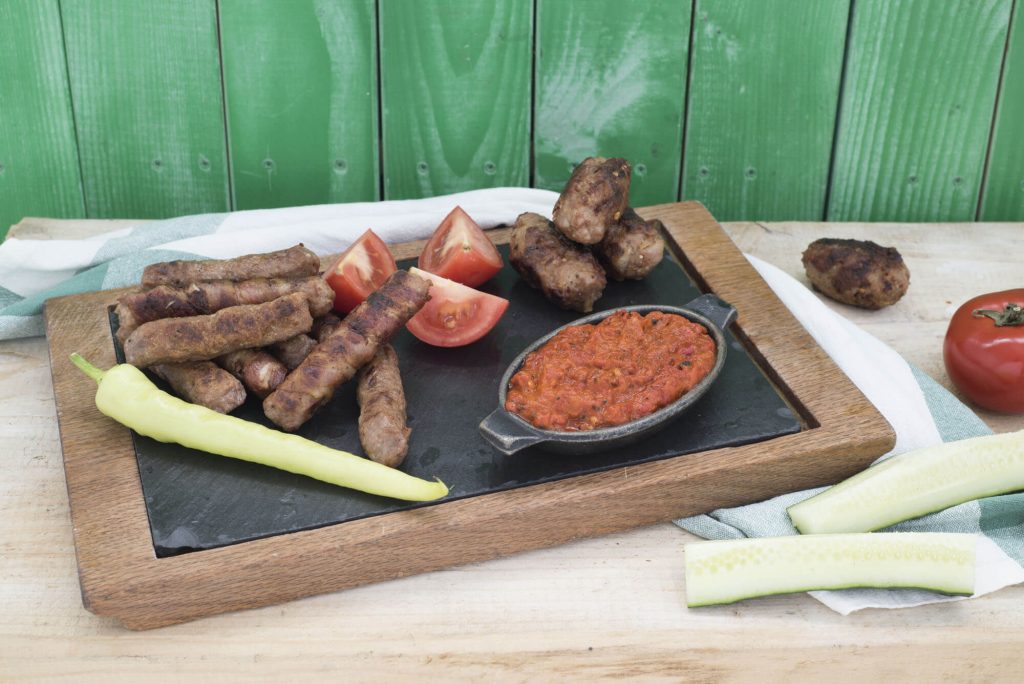 Different variations of this dairy specialty are made in the countries of the Middle East, Central Asia, Iran, Afghanistan, India, Mongolia, the countries of the former Soviet Union, and in England the product is similar to our young kaymak, called Devonshire cream. Still, we’re always a bit caught by surprise when we’re supposed to describe the taste of kaymak to someone who’s never tried it.

It’s not cream but it’s creamy, it’s neither sour cream nor butter but is made from the fat separated from milk. It can be salty but also sweet. In fact, history says that it was created as a candy and served with honey, as it’s traditionally eaten for breakfast in Turkey nowadays. It has a whole range of tastes – from light and gentle to the one just properly sharp, slightly too curdled. In fact, we aren’t at all sure that we can accurately explain the taste of kaymak in plain words. Kaymak is simply kaymak. It works just as well as a side dish, salad or a main dish. What we know for sure is it goes perfectly with ajvar and hot pita or fine pastry 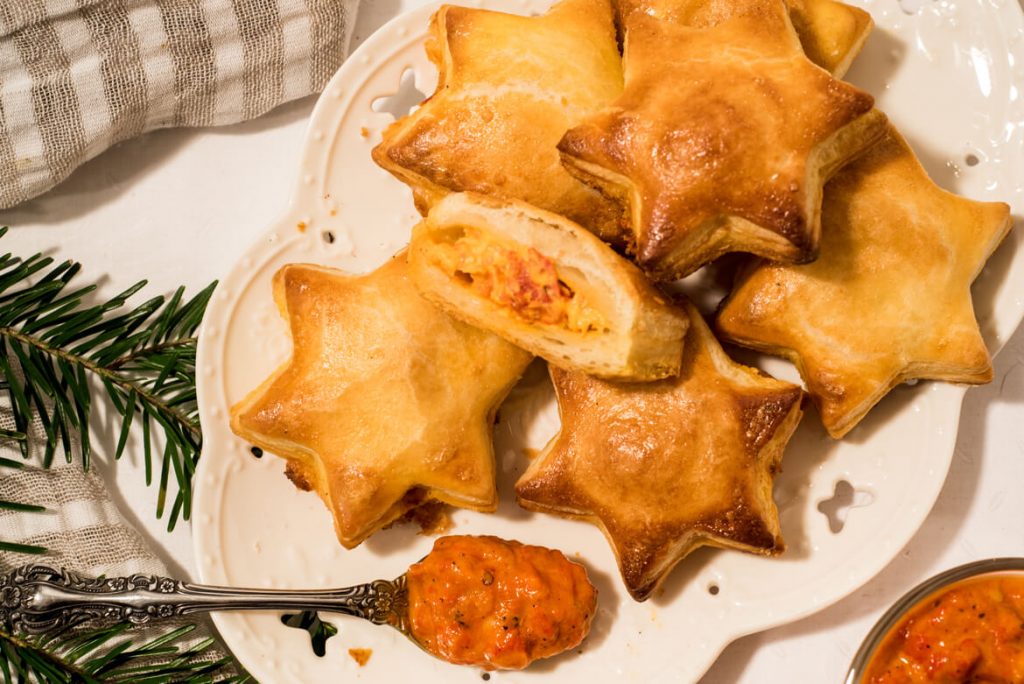 The original, traditional proja is made with only four ingredients: white or yellow corn flour, but definitely a coarse one, milled between two rocks in a mill; a pinch of salt, lard and hot water. Poured into a baking pan, it’s baked until it gets that beautiful golden yellow color. Proja prepared this way is thin, crispy and irresistibly delicious.

As the true product of the national cuisine, proja was and still is an extremely important dish. For a long time it represented the basis of nutrition in these areas, it was used as a cheap substitute for bread or even a whole meal. We used to abandon it in periods of abundance and return to it in the years of scarcity, until we recognized in it the thing that had brought the Italian “cucina povera” or “folk cuisine” to the very top of the world’s gastronomy: a piece of warm, delicious proja carries in it much more than is needed to satisfy one’s hunger. All those fragrances and tastes are involved, the memories of warm and familiar places, pictures of massive black stoves and hard-working hands, dining tables gathering the whole family.
That’s how proja took the honorary culinary place it deserves, after having fed us for centuries. In the meantime, many of its varieties a bit richer with ingredients, called “projanice” or “projare“, were created, but only one of them, the one from the beginning of the story, is named proja. 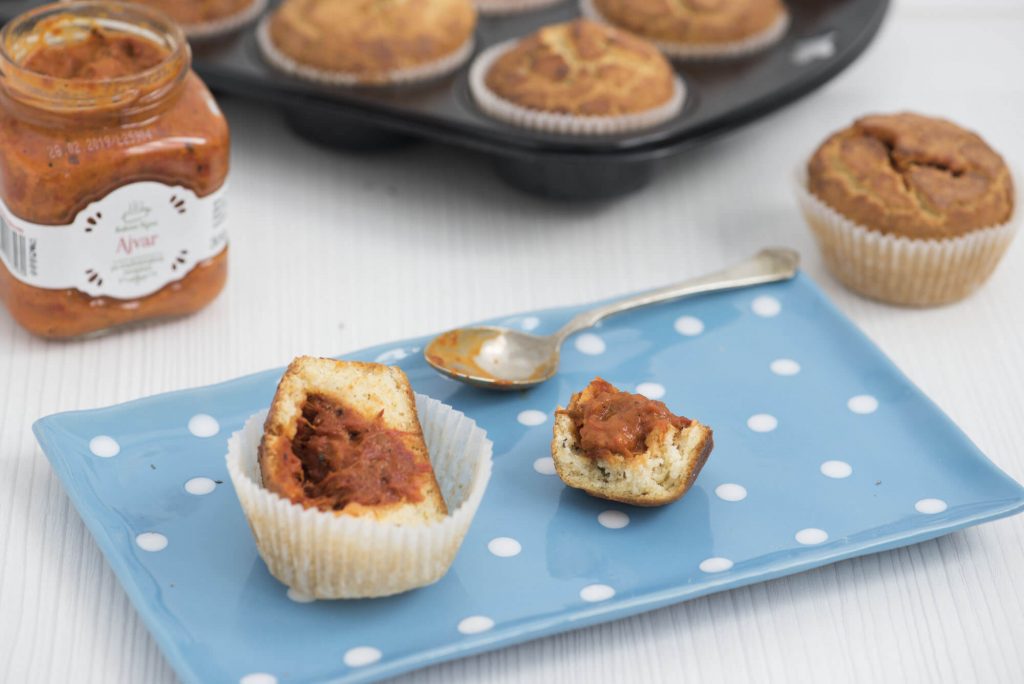 At the very end of this gastronomic journey through tastes that our souls, the icing on the cake if you will, we’ll speak about ajvar, of course. A unique local delicacy celebrating the cuisine of our mothers and grandmothers. For before it was conceived in Belgrade’s taverns as “Serbian caviar” at the end of the 19th century, the story says it had been long cooked on stoves of housewives throughout the Balkans. Made with only four ingredients – baked red peppers, salt, oil and vinegar – at first glance, one may consider ajvar to be an ordinary pepper spread. But it’s enough to try it just once to convince you of just the opposite.
A luxurious, full-flavored and delicate, almost creamy texture, inspires every gastronomic traveler to search for all of its mildly smoky, sweet-sour, rich aromas and nuances. As a spread or dip, salad and side dish, ingredient and whole meal, ajvar highlights and completes other tastes without losing any of its aromas. It goes phenomenally with kebabs, kaymak, proja as well as with eggs and cheese; in fact, there’s almost no food ajvar doesn’t pair well with. 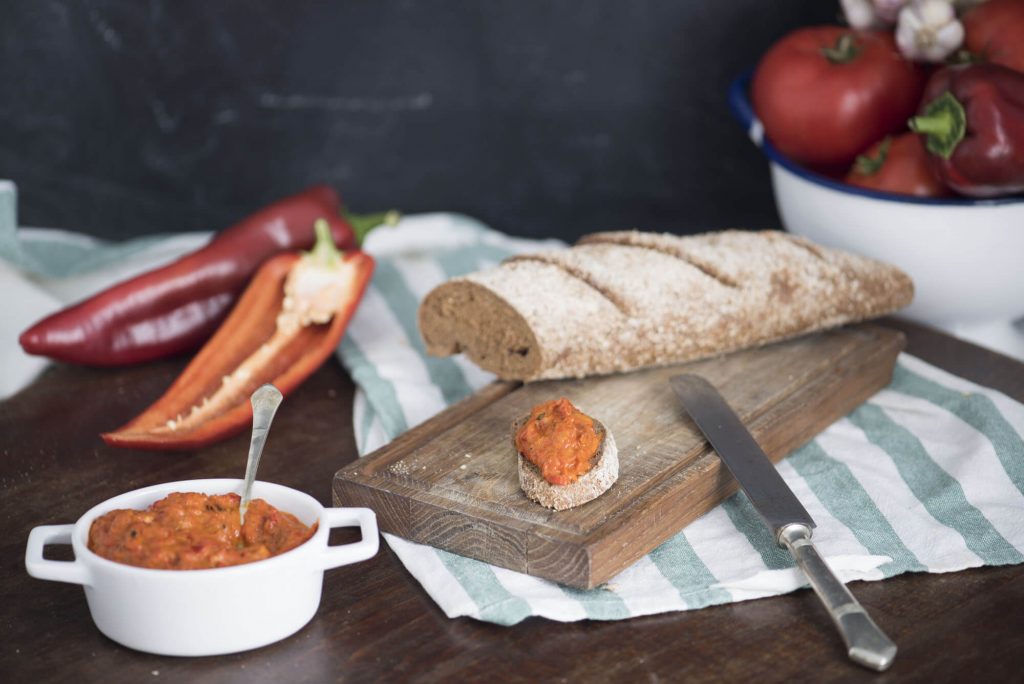 The secret of this timeless ajvar flavor lies in the process of preparation and, you guessed it – freshness of the finest ingredients. As every master of ajvar knows very well, behind each jar there is the entire ajvar preparation ritual. There’s a selection of the best peppers, which have to be fleshy and dry, grown especially for ajvar, so they’re usually flattened so that they can be evenly heated and peeled as easy as possible. Baking on the stove with glowing charcoal below follows. After that, peeling and seeding peppers, squeezing, chopping, and then cooking for a long time on low heat, with constant mixing and finally – careful pouring into prepared jars and gradual cooling.

So the whole process of preparing ajvar takes a few days. During that time, from well-known stoves and huge pots intended exclusively for the preparation of ajvar, all those well-known flavors are spread wide, undoubtedly proving to any gastro-traveler that they have finally arrived home, no matter the latitude or the longitude.

FROM THE FACTORY, BUT WITH ALL THE FLAVOUR OF HOMEMADE. REVEALING THE SECRETS OF OUR AJVAR