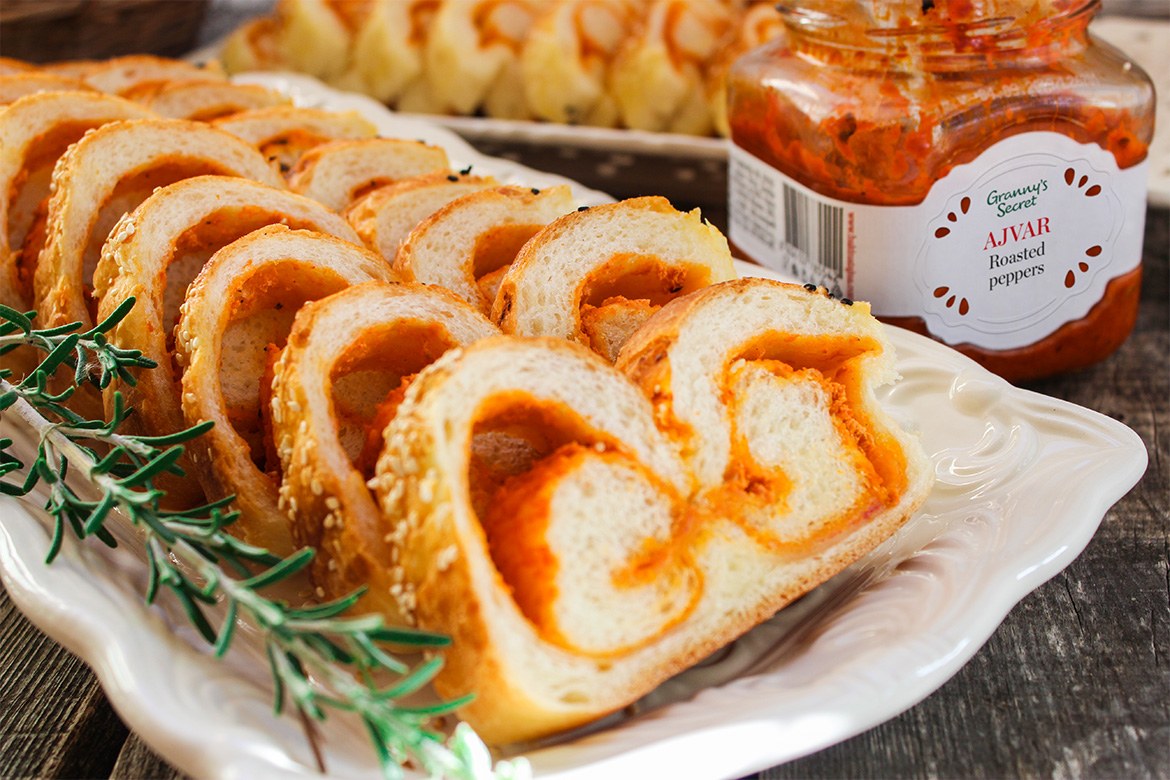 Is there anything better than ajvar tucked in fine, soft dough of real home-made strudel! The recipe for wonderful piquant, and decorative strudel with ajvar comes from the Jekinkapric blog by Jeka Marić.
It’s a fantastic asset to a festive menu or Sunday lunch, but with a little salad, it’s easily turned into an entire meal. No matter what occasion you make it for, we’re sure you’ll love it just like we do.

1 yolk, 2 tablespoons of oil, seeds of your choice

Take the butter out of the fridge and let it soften at room temperature.

Stir a teaspoon of flour, sugar, and mashed yeast in warm milk and leave somewhere warm until it starts foaming.

Put flour into a larger mixing bowl, add yeast which was active in milk, and warm water, oil, salt, and sugar.

Knead the dough until smooth, soft, non-sticky, and then cover the bowl with a clean tea towel or stretch film, leave somewhere warm for about 45 minutes until the dough has doubled in size.

In the mean time, mix softened butter, cheese, and ajvar together using a mixer.

Flour the worktop and roll out the first portion of the dough using a rolling pin until about half a centimeter thick (dimensions about 40x35 cm).

Coat it with a half of beaten filling with ajvar, and then start rolling from the longer side so that the rolls “meet” in the middle.

Put the strudel onto a baking tray which is either coated with oil or covered with baking paper.

Repeat the same process with the other half of the dough.

Cover the rolled strudels with a clean tea towel to prevent drying and leave them to rise in the baking tray for another 10-15 minutes, just until the oven heats up. You can put a piece of aluminum foil between the strudels to make sure they don’t stick together during baking.

Before you start baking, coat the strudels with yolk mixed together with a bit of oil and sprinkle them with seeds you like. Cover the entire baking tray with a foil to make sure the strudels don’t get golden brown too early, so bake them covered for first 20 minutes, and then remove the foil and finish baking (for around 35 minutes at 180 degrees with a fan turned on).

Wait until the strudels cool down to cut and serve them.